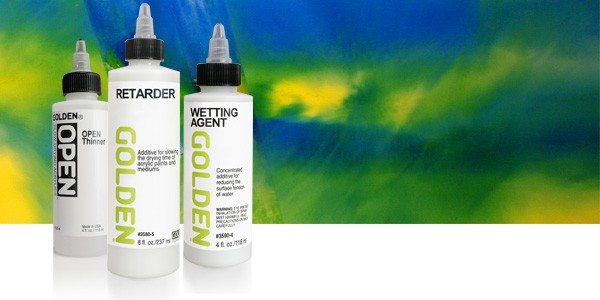 GOLDEN OPEN Thinner is a water-based additive designed to thin the consistency of OPEN Acrylics without altering open time, as well as maintain and adjust the workability of colors on the palette. OPEN Thinner can also function as a thin-bodied retarder when used with GOLDEN Heavy Body or Fluid Acrylics. OPEN Thinner contains no binders, does not form a film, and should never be used alone.

OPEN Thinner should not be used in thick applications. Applications of more than 1/16” may result in:

Use with GOLDEN OPEN Acrylics

Maintaining Working Properties
As OPEN Acrylics dry, water and other volatile additives evaporate causing the paints to become stiffer with increased brush drag.  Adding small amounts of OPEN Thinner replenishes the volatile components, allowing the artist to maintain a long working time and to slow the paint from drying on the palette. It can be difficult to accurately gauge the evaporation rate of volatile ingredients during painting, so add sparingly.

Use with moderation. Over-additions of water or OPEN Thinner can result in a weak, underbound film.

Rewetting of OPEN Acrylic Colors
OPEN Acrylics can be reactivated for many hours after initial application, allowing for extended periods when multiple layers can be worked and blended into each other. To reopen films before they have fully â€˜locked down'i, apply OPEN Thinner directly to the paint film, brushing back and forth until the paint has been reconstituted. Even after OPEN paint films have initially set up and become tacky, they can still be reactivated, although more extended or vigorous brushing might be required.

Non-Absorbent Palette During Working Sessions
OPEN Acrylics will stay usable on a non-absorbent palette, such as glass or enamel butcher trays, for extended periods of hours and even days without using additional retarders or moisture-retaining inserts by simply covering the palette when not in use. However, depending on the environmental conditions, some thickening of OPEN Acrylics can occur in the course of painting.  Some artists have used this natural thickening of the paints as a method of creating a different working consistency without adding a medium.
When using non-absorbent palettes, the following guidelines will help maintain the working time and blendability of OPEN Acrylics:

Left unattended, and under typical ambient conditions, a dollop of paint roughly the size of a small marble could exhibit noticeable surface thickening within 2-4 hrs.  However, if misting with OPEN Thinner, similarly sized dollops were still usable after 24 hrs., with only slight skinning due to a 12 hour period of drying overnight.

Non-Absorbent Palettes Stored While Covered
By simply covering a non-absorbent palette, such as an enameled butcher tray, or placing your palette in an enclosed storage container, even wet mixtures of OPEN Acrylics will stay soft and useable for many days if not weeks. If areas feel tacked up, small additions of OPEN Thinner should easily revive them.

Misting the palette beforehand with either water or OPEN Thinner will further extend these periods as well as help mixtures of OPEN Acrylics with faster drying GOLDEN Acrylics stay useable. Although both OPEN Thinner and water alone are helpful, OPEN Thinner is generally more effective and is our recommendation.

The ability of mixtures of regular GOLDEN and OPEN Acrylic Colors or Mediums to remain useable will be very dependent on the ratios of the mixtures and whether they have been misted with OPEN Thinner or covered with a layer of OPEN Medium. In most cases these should do quite well for a period of days. However, dollops of pure Fluid and Heavy Body Acrylics might become heavily skinned over or not usable during the same period.